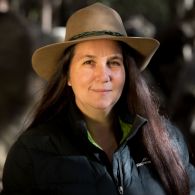 Discipline of Geography and Spatial Sciences University of Tasmania

Melinda McHenry conducts research on soil conservation. In the context of fire, this means that she studies the characteristics of soils that might make them susceptible to fire, such as moisture and water content, organic matter content, depth and distribution under plant communities. From a conservation perspective, Melinda is interested in the protection of rare soils, or soils with high values of carbon, nutrients and water, that could be lost to fire.
Melinda’s research related to Fire Centre focusses on organic soils and peats in areas vulnerable to climate change, such as mountains and wilderness areas. In addition to providing climate scientists and fire managers with better estimates of the extent and distribution of rare soils in fire-vulnerable regions, she will also be measuring response of soil bacterial and fungal communities to climate change. The purpose of this research is to better understand how soils function in a changing climate, so that barriers to restoration of mountain plant communities, and long-term changes to soil carbon loss can be better understood.